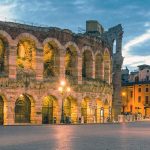 The Veronese shores of Lake Garda offer an intoxicating landscape, and burst with colour. Charming small towns, vineyards and olive trees dot the shoreline. A water-lovers paradise, the deep blue waters of the lake and its eastern riviera offer an incredible variety of attractions that can be visited in a half day tour from Verona or the Valpolicella, or on a more leisurely full day tour.

Start at the southeastern corner of the lake, where the waters of Lake Garda mix with those of the Mincio River, in the town of Peschiera. Sixteenth century sammicheliane walls conjure up images of the town in its role as a Venetian stronghold, while lakeshore beaches and a nearby amusement park, Gardaland, all beckon within easy reach. Like Peschiera, many other towns on the lake’s eastern shore developed around historic fortifications laid down during Scaliger and Venetian rule.

Some examples are Lasize, marked by a charming historic center; Bardolino, noted for its wine, the small romanesque church of San Severo, and the elegant villas of Canestrari and Bottagisio; and Garda, dominated by the unmistakeable Rocca hill, and Venetian architecture. One of the most panoramic and romantic stretches of the lake begins north of Garda, where the headland at Punta San Vigilio encloses a wide bay. The incredible beauty of this area, in addition to the views that can enjoyed from the summit of Mount Luppia, must certainly have held great charm for those that constructed its nearby namesake church and villa (indeed, the area has hosted many famous guests since the 13th century).

After San Vigilio, the eastern shoreline changes dramatically: the lake narrows, as it is closed off by Mount Baldo to the east and the Brescian pre-alps to the west. Another Scaliger castles rises in Torri del Benaco; there, you may also admire the beautiful Palazzo del Capitano del Lago, the indoor lemon nurseries or limonaia, the Torre del Berengario, and the small church of SS Trinità. Picturesque moutain roads lead to Albisano and San Zeno di Montagna nearing the summit of Mount Baldo.

This area is characterized by stone houses and narrow lanes, notably in Pai, Castelleto and Biazza. Enjoy Cassone, with its tower and hermitage of SS Benigno and Caro, and the Val di Sogno, a scenographic inlet enclosed around the islet of Trimelone. The next view opens onto Malcesine, probably one of the lake’s most evocative villages, thanks to its superb Castello Scaligero, cobblestone streets, and the interesting botanical species that proliferate in its unique micro-climate. From the center of town, a cableway climbs 1752 metres to Tratto Spino, and offers sweeping views of Lake Garda.